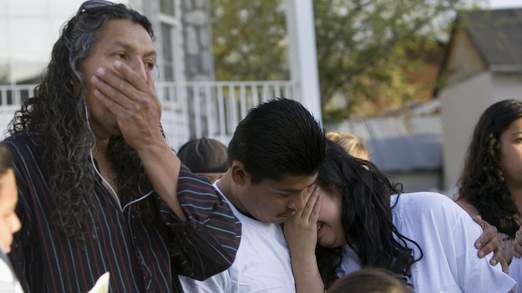 Antonio Lopez, from left, with Juan Munoz, and Johana Portillo-Lopez, daughter of Ricardo Portillo, who died after injuries following an assault by a soccer player on April 27, becomes emotional after a news conference discussing Portillo’s death, Sunday, May 5, 2013, in Salt Lake City. Police have accused a 17-year-old player in an April 27 recreational soccer league game of punching Portillo after he called a foul on him and issued him a yellow card. Portillo died Saturday after a week in a coma. (AP Photo/The Salt Lake Tribune, Kim Raff) DESERET NEWS OUT; LOCAL TV OUT; MAGS OUT.